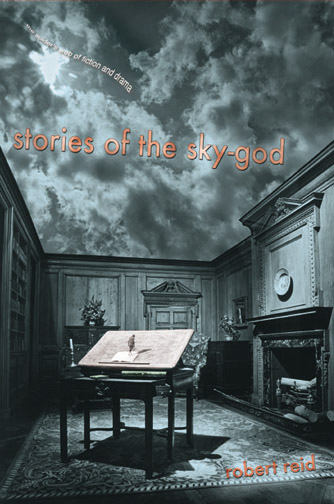 Stories of the Sky God

The stories of Stories of the Sky-God: Spider’s Web of Fiction occur in the past, present, and future of the human world. The themes are blues themes and the tellers of the tales are trickster-transformers, transforming an unacceptable reality of death and separation into tragedy, comedy and romance. The stories start in the future with “Thaddeus.” “The Rock Garden” goes further into the future. “Liberation” takes us back in time in order to go forward. “The Contract” starts our trip forward, and “Wheels and Miracles” continues our journey from past to present to future. The settings vary from Kansas in the future to Ankara, Turkey in the present and empathizing with the characters we struggle to live in the finite worlds that all of us share.

An aloe plant called Madame Blavatsky sits on the ledge of a window in the Wellness Center outside of Munich, Germany in my debut novel, THE HEALING CIRCLE. The plant is ordinary, easily overlooked, particularly in this far wing of a hospital dedicated to rest and relaxation. She observes all kinds of things from this […]

Conversations Between Friends: COCO PICARD and Sue Mell in Craft

Consider the personal effects one leaves behind, the way those objects, once laid out, recall the idiosyncratic logic of a life—is there more compelling inspiration for a novel? Authors Coco Picard and Sue Mell met through the BookEnds SUNY alumni group months before their debut novels came out. They couldn’t stop talking about books and art—and the […]

Tell us a little bit about yourself and your published book (s).I am a writer, cartoonist, and curator. I started the Green Lantern Press, a non-profit art space and publisher in Chicago and ran it for about seventeen years. It’s a great city—the art and lit community is warm, supportive, and brilliant. A great tradition […]

Hopefully you’ve been following our recent comics journalism pieces on art and artists created by Reader contributor and former Chicagoan Coco Picard (her latest, an interview with artist and professor Nick Cave, was in our August 18 issue). If you’re intrigued by Picard’s comics style, check out her debut novel The Healing Circle, a magical tale including a terminal diagnosis, motherhood, […]

Writers are often inspired by some ghost—a lingering feeling or charge, whether attributed to one’s own inner psychological state or an honest-to-god spirit. I think of William Butler Yeats, for instance, who relied heavily on the automatic writing of his spouse, Georgie Hyde-Lees, or Gisèle Prassinos, discovered by and published alongside the surrealists at age 14. […]

Both of my parents died when I was in my early twenties. I was still immersed in their friend group at the time, as well as close with my extended family and two siblings, so I saw a range of reactions firsthand. It was as if the deaths happened differently for each of us. I […]

“In Learning to Live (Aprendendo a Viver), Clarice Lispector calls for ‘patience to observe the flowers, imperceptibly and slowly opening.” As plant philosopher Michael Marder points out in his essay, “Lispector and the Seeds of Time,” Lispector calls for a type of patience that would make one still enough to observe a plant’s movement: ‘Patience, tying together the […]

Coco Picard shares a playlist for her novel THE HEALING CIRCLE in largehearted boy!

“My novel, The Healing Circle, follows Ursula, whose terminal disease makes her leave family and friends in California—friends who share her penchant for New Age remedies—for a miracle cure in Germany. The book takes place in her hospital room. Sitting on the window ledge, an aloe plant called Madame Blavatsky is Ursula’s main companion. The book […]

In The Healing Circle, a bad new age mother abandons her family in California to pursue a miracle cure in Munich. Once she gets there however, she wonders if she might have already died.

HOPE, WHEN HELD past the point of reason, is liable to transform into a certain kind of absurdity. Over the course of The Healing Circle — the latest novel from writer, artist, and curator Coco Picard — a woman and her loved ones walk the narrow line between hope and delusion as she battles cancer. The Healing […]

A unique and inherently engaging novel about life, death, and dying, “The Healing Circle” showcases author Coco Picard’s natural flair for crafting a novel of serious substance with a flair for humor in service to the human condition.