For two years Green remained in Rochester, working as a group home counselor for adults with schizophrenia.

In early 2004, Green began a conversation with Stellasue Lee, poetry editor of RATTLE, a literary journal based in Los Angeles, which led to a long-distance part-time job as assistant to the poetry editor. Six months later he was offered the full-time position of assistant editor, and moved across the country to California.

Taking over as editor in 2006, Green introduced several innovations, including the Rattle Poetry Prize, which offers $5,000 for a single poem, the Neil Postman Award for Metaphor, and the highly successful slam poetry issue (Summer 2007). Circulation has since swelled, making it one of the largest literary journals in the country. RATTLE won its first Pushcart Prize in 2007 and also had a poem reprinted in that year’s Best American Poetry anthology.

American Fractal is Timothy Green’s first book-length collection of poetry. His poems and short stories have appeared in dozens of publications, online and in print, including the Connecticut Review, Florida Review, Fugue, Gargoyle, Los Angeles Review, Mid-American Review, Nimrod International Journal, Paterson Literary Review, and Runes. Green has been nominated for the Pushcart Prize and the Rhysling Award. An earlier version of American Fractal was a finalist for the New Issues Poetry Prize, and won the Phi Kappa Phi Student Recognition Award from the University of Southern California, from which he will graduate with a Masters in professional writing in 2009. 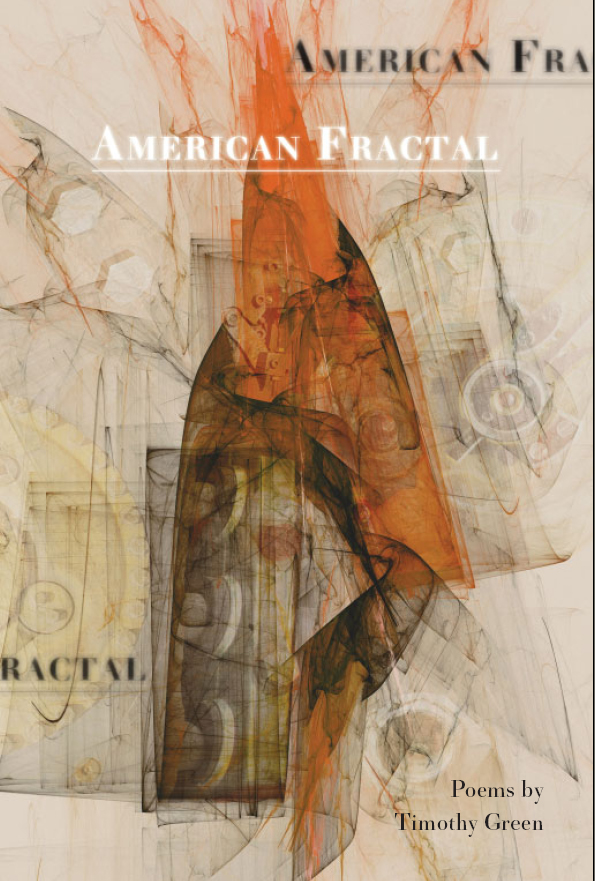 Each portion forming a reduced-size copy of the whole, a fractal is forever fragmented, both chaotic and ordered, endlessly complex. Timothy Green’s American Fractal sees this pattern emerge from the fabric of modern culture, as it navigates the personal, the political, and the metaphysical, in a lyric dreamscape in which an eerie chaos lurks just behind the facade of order–where “what looks like / a river…could be a log,” “as if accident were / the fundamental attribute of life.” In separate poems, one man sells ad space on his forehead, while another examines the multitudes of his own voice on an audio cassette recorder. Each life is but another section of the fractal, the past and the future two mirrors that face each other to perpetuate the illusion of infinites. At turns evocative and sweetly ironic, Green straddles the line between accessibility and complexity, exploring “how the wind whispers our secrets,” how “that little tremor” of understanding “touches your sleeve, lets go.”

Diane Thiel is the author of twelve books of poetry and nonfiction.

Diane Thiel’s Poem, “Time in the Wilderness,” from QUESTIONS FROM OUTER SPACE is Featured on SWWIM!

“Time in the Wilderness” by Diane Thiel is from Questions from Outer Space (Red Hen Press, 2022).

Diane Thiel’s Questions from Outer Space explores fresh and often humorous perspectives that capture the surreal quality of our swiftly changing lives on this planet. The poems travel through questions on many fronts, challenging assumptions and locating unique angles of perception.

Diane Thiel, author of Questions from Outer Space, had a poem, “Shadow and Light,” published on Verse Daily.

“Mosaic in Pompeii” by Diane Thiel featured in Verse Daily!

Today’s poem is by Diane Thiel “A misunderstanding of a fresco,a figure with papyrus on the east wall.Someone assumed wrong two centuries ago,but the name remained—the House of the Tragic Poet.

In a digital age, classic romantic gestures can go a long way, especially during the month of love. Two University of New Mexico creative writing professors sat down with the Daily Lobo to share tips with readers on why and how to write the perfect love letter. Diane Thiel has been teaching creative writing at UNM for […]

Several poets featured in the latest issue of The Hudson Review

Author of Questions from Outer Space, Diane Thiel, had her poem featured in Terrain!

Thiel’s third full-length poetry collection, and her twelfth book, arrives bristling with navigable strangeness and open-ended questions. The 67 sometimes otherworldly poems here weave through biology, parenting, the pandemic, world travel, life on Zoom, growing up in the South, the multiverse, and the fate of the earth, among other subjects.

QUESTIONS FROM OUTER SPACE by Diane Thiel Reviewed in the Florida Review!

Diane Thiel’s third collection of poetry, Questions from Outer Space, comes after an interlude during which the poet devoted her energies to a travel memoir (The White Horse) and the translation of contemporary Greek fiction. Her first two collections (Echolocations and Resistance Fantasies) garnered acclaim, including the Nicholas Roerich Award, for their intelligence, wit, wordplay, and attention to […]

Diane Thiel’s much-awaited anthology of poetry, Questions from Outer Space, is worth the wait. This collection is divided into four parts, each touching on a particular subject or idea that delivers critical but compassionate and witty observations. The first part is titled Questions of Time and Direction and deals with the inevitable march of time […]

Diane Thiel is the author of eleven books of poetry, nonfiction, and creative writing pedagogy, and Questions from Outer Space (Red Hen Press, 2022) is her third collection of poems. I purchased this book when I was visiting Asheville, North Carolina, and wandering around a bookstore. I liked the title as I assumed it would reveal poems […]

Questions From Outer Space is about coming to terms with humanity’s destructive choices and orienting ourselves to life as a result. Diane Thiel’s poems lament our destruction of planet Earth and caution against how technology separates us from one another—yet the book ultimately presents a message of hope. These poems offer the possibility of solace in […]